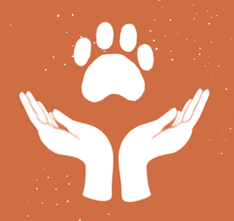 Nancy’s note: I asked for Beverley’s permission to repost this article here on the blog, as I really appreciated her insights about Reiki and how it both complements and differs from Tai Chi and Qigong.

New in 2017, we will play with qi (“chi”), life energy, in a different way than I have been taught and than I have been teaching. This change has been 40 years in evolution and manifests as the synthesis of two powerful traditions, Chinese and Japanese, in mindfulness, moving meditation, energy cultivation, and healing. 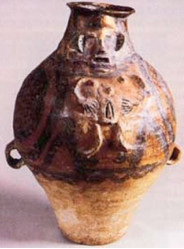 Qigong (chee gong) is a health practice developed in China thousands of years ago.  Archeological evidence supports the claim that the origins of qigong lie in the shamanic dances depicted in this vase from the Yang Shao culture of Northern China, 5,000-3,000 BCE. The late archeologist Kwang-chih Chang saw in this pottery surface a hermaphroditic wu priest-shaman.[1] Later observers interpreted the figure to be in a posture of qigong with qi gulping evidenced by the gaping mouth. Tradition says that the wu shamans choreographed qigong by imitating the self-healing behaviors of animals.

Qigong, and some forms of the later, related martial art, tai ji, are based on the use of breath, qi, and body movements, especially of the limbs, to maximize health, longevity, and spiritual awakening. Qigong movements can be done lying down, standing, or sitting, including sitting on a horse.

In 1975, while a medical student, I began to practice sitting meditation. I especially practiced meditating without thinking about dinner, vacation, or romance. At the time, it was somewhere between boring and impossible to just sit still, watch my breath, and empty my mind.

Many years later, I was delighted to discover moving meditation in the form of tai ji and qigong. These practices allowed me to use whole body movements to clear, strengthen, and relax the mind and body. Both tai ji and qigong emphasize the cultivation of qi as the vital energy or life force that circulates throughout the cosmos and within all things living and non-living.

Then a few years ago, I suffered ill effects from improper use of qi after overexerting myself in strenuous kung fu practice: I was trying to make the team for the Shao Lin Temple USA’s Chinese New Year Parade performance for the Year of the Horse.

As someone who had always had what Traditional Chinese Medicine calls excess “head qi”—an intensely active mind, frequent headaches, dental and ophthalmic oddities, and dry, frizzy hair—the excess qi from kung fu went straight to my head. Rolling over in the middle of the night while mentally rehearsing my kung fu audition, I suddenly felt the room spinning violently. In Western medical terms, I was experiencing a classic attack of benign paroxysmal positional vertigo, a disorder involving displacement of small crystals in the vestibular (balance) apparatus of the inner ear. In Chinese medicine, the vertigo was a rare pathological extreme of the normal qi awakening of 搖風擺柳 Flowing Breeze, Swaying Willow.

In the years following the initial attack, I have had a few milder episodes. (I prefer to call them episodes rather than attacks. It’s not psychologically healthy to think the body is assaulting us, as in a heart “attack.”) In between episodes, I had lingering sensations of movement, like ocean waves, in my head. Acupuncture, medical qigong, physical therapy, jogging, and outdoor activities with horses helped enormously. On a good day, I was 88% back to normal. However, I was on a quest to be symptom free.

Reiki Principles
Just for today,
do not anger,
do not worry.
Be filled with gratitude
Be honest in your work
and be kind to everyone.

I had been peripherally aware of Reiki for 30 years. It was on my list of things in the category Probably Too Vague or Flaky to Bother With.

Then just when I was looking to leave no stone unturned in my quest for complete resolution of vertigo symptoms, I received a notice about a Reiki class with gifted healer and animal communicator, Nancy Windheart. I have come to respect and adore Nancy over the years and was immediately drawn to do the Reiki Level 1 attunement with her.[2] 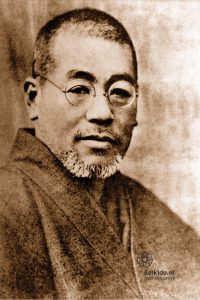 Reiki was developed in 1922 by Japanese Zen Buddhist monk, Mikao Usui. Usui is also reported to have been heavily influenced by Christian studies. Some versions of his history say he took ordination as a minister. Reiki has since been passed down through many lineages all over the world.  In sharing Reiki, the practitioner draws ki (“kee”) to herself, then may send it on to another person, animal, or situation for healing. The character for Reiki at the top of this section contains the Chinese ideogram for the wu shaman 巫. The upper portion contains three mouth radicals , which suggest the qi gulping seen on the ancient pottery. In Chinese, the characters are pronounced ling qi (“ling chi”).

Rei (“ray”) is translated as spirit and ki is the same as qi. So reiki is spirit energy or an energy spirit. Reiki is akin to laying on of hands or prayer. Although there are no good medical studies proving the efficacy of Reiki in healing, there are many anecdotal reports of marvelous effects. (There are a few good quality studies showing the benefit of intercessory prayer. See references 2 and 3.)

When I received my Reiki Level 1 attunement, I was blown away by the difference between the felt qualities of reiki and qi.[3] The qi of aikido, kung fu, tai ji, and qigong was taught, and felt, to me as inert, unconscious, unfeeling, finite and exhaustible when converted into one’s own resources for martial arts and healing. Reiki was taught, and felt, to me as alive, sentient, compassionate, and infinitely flowing through the body, never to be depleted. With self-reiki treatments, I felt better than at any time since the vertigo began.

As I thought about how to synthesize all I had learned, I contemplated this comparison of qigong (and tai ji and kung fu and aikido) on one hand and reiki, literally, on the other hands. My teaching going forward aims to combine the best of qigong and Reiki.

Top Ten Points of Comparison Between Qi and Reiki

Qigong and Reiki are complementary to each other. Qigong excels in whole-body coordination of movement, breath, balance, grounding, and energy cultivation. Reiki excels in its methods of quiet meditation, transmission of wisdom and compassion, and self-replenishing flow of energy. Reiki also emphasizes receiving and transmitting love and gratitude.

As described in the references below, a few other multi-arts practitioners have combined elements of Reiki and qigong into a sort of “reiqigong.”

Reiki and Ling Qi in Equine-imity

We will invite the experience rei chi qong as the infusion of wise, compassionate, relaxing, and healing energy during our moving meditations. To get the best of both worlds:

[1] The Chinese word wu 巫 , spirit medium, shaman, sorcerer, or doctor, was first recorded in 1600 BCE. This word is found in the character for reiki at the top of the next page, which is pronounced ling qi (ling chi) in Chinese and also means spiritual energy.

[2] Attunement is a sort of initiation blessing conferred by a Reiki Master Teacher.

Beverley Kane, MD, is Adjunct Clinical Assistant Professor of Medicine at Stanford. She is Program Director for Equine-imity and Stanford Medicine and Horsemanship, which teaches interpersonal skills to medical students and healthcare professionals. She is also the instructor for Stanford Medical Tai Chi, which includes the study of the peer-reviewed medical literature on the health benefits of tai ji and qigong. In 2003, she founded Horsensei Equine-Assisted Learning & THerapy (HEALTH). Her private practice provides equine-guided workshops for medical, corporate, and community groups, and psycho-spiritual and somato-spiritual counseling for couples and individuals. Dr. Kane is EAGALA (Equine-Assisted Growth and Learning Association) certified through Level 3 and is a riding instructor credentialed through the Certified Horsemanship Association. She is a certified tai instructor through the international Tai Chi for Health Institute. Her personal somatic practices include tai ji, qigong, horse grooming and riding, jogging, Chinese calligraphy, and wine tasting. http://www.horsensei.com 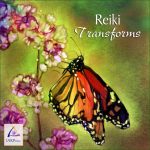 Why I Teach Reiki Classes OnlineReiki, Reiki for Animals, Uncategorized

How Reiki and Animal Communication Can Work TogetherReiki, Reiki for Animals