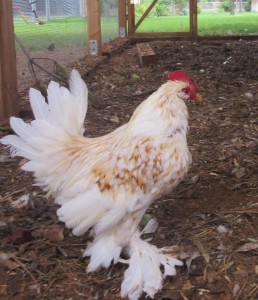 In honor of Mr. Rosie:

My beloved little bantam rooster, Mr. Rosie, died on May 3, 2017. He was just a few weeks short of his 11th birthday. He left the physical world just a few days after completing his last “teaching assignment”  for my Beginning Animal Communication Class.

Mr. Rosie blessed our family with his quirky personality, his funny antics, his devotion to his hens, and his exceptional longevity. He was a frequent and enthusiastic teacher in my animal communication classes, and he touched many people with his humor, his sensitivity, and his awareness.

My first connection with Mr. Rosie was in July, 2006, when I was on a retreat in Costa Rica facilitated by Penelope Smith.  Penelope had recently moved to Arizona, and was excited about the new chicks she had added to her animal family the month before. She was concerned, however, about a little chick she had named Rosie, who was not thriving physically. Rosie had a deformed leg and was dealing with other issues, and Penelope felt it was possible that the little chick would die while she was away.

The woman who was caring for Penelope’s family tenderly nursed little Rosie with herbs and Reiki, and the frail little chick with the misshapen leg pulled through the health crisis. After another month or so, she began to crow. 🙂 Rosie became Mr. Rosie, and was placed into a home with a woman and her young daughter where he would be the only rooster.

The little girl loved Mr. Rosie, and would cuddle him and hold him on her lap. After a few years, the family’s situation changed, and Mr. Rosie came back to live with Penelope and her flock. Meanwhile, I had moved to Arizona and had my own little bantam chicken flock.

When my little rooster Guido died in 2011, Penelope and I asked Mr. Rosie if he would like to come to live with me, as he was having a hard time with being attacked by some of the other roosters. He said yes. So in July, 2011, Mr. Rosie came to live with me and my hens.

I’ll never forget Mr. Rosie’s happiness when he arrived with my flock.

All of these hens are MY hens? My own flock? No other roosters??

He was so happy and proud…he crowed and crowed with joy. Mr. Rosie loved his hens, and he took very good care of them. He bravely stood his ground in their defense when there was a perceived danger to them, like a big galumphing Afghan hound puppy outside the fence. 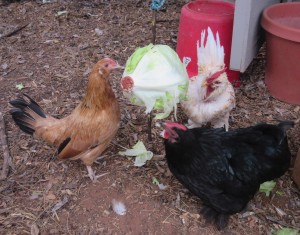 Mr. Rosie had an unusual, scratchy, squeaky crow. I loved it. He would crow to me frequently as a greeting when I’d come home, or come out of the house into the yard, or any time he heard my voice. He also loved to crow through the night when there was a full moon. His crow carried so many nuances of meaning, expression, and awareness. I never tired of hearing it.

Mr. Rosie loved being an teacher in my animal communication classes, and he worked with many, many people over the years. It’s not a coincidence that Mr. Rosie waited until his last “teaching assignment” was complete before he made his transition. 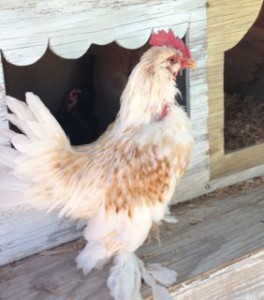 share his chicken perspective and awareness with humans. He would especially delight people who weren’t familiar with chickens, or who had stereotypical ideas about chickens. He would show them his joy in his body, how he felt when he moved, what his crowing felt like and meant, and his awareness of his environment, the land, the earth. He often surprised people with his funny sense of humor and his quirky, wise awareness.

He also taught people about human projections and how to differentiate those from direct connection and communication with an animal. Often, people would assume, from a well-meaning, concerned animal-welfare perspective, that Mr. Rosie was upset about the idea of chickens being eaten as food by people. His response would be typically straightforward:

I’m safe and so are my hens! I don’t have any idea about other chickens…I don’t think about them at all. I focus on my own life. I’m safe! I’m happy! Bring me the watermelon!

In the last few days of his life, I knew that Mr. Rosie was weakening. I gave him some special herbs and supplements, and extra Reiki and mealworms. But I knew, and Mr. Rosie also knew, that he was coming to the end of his life. As is often the case with birds, his death was quick. When I went out to feed the chickens the morning that he died, Mr. Rosie was still on his perch, and he communicated to me that he knew that he would be leaving soon. He asked me to leave him alone and not touch him or look at him, so that he could complete his journey with his physical body. When I returned about an hour later, he was gone.

I buried his body under the mesquite trees in my yard, with a simple ceremony of song, chant, and prayers. There are crystals and stones to mark his spot, and prayer flags in the trees above him.

Since his death, Mr. Rosie has been communicating with me that he feels a great sense of fulfillment and joy about his physical life. He loved his life, his time with me, and his flock of hens, and he remains close to all of us as we adjust to this shift in his relationship with us. He shared with me,

I love this new feeling of being expanded, free, and very, very big and light! My life in my body was fulfilled and complete. I had a good life, and I also had a good death. I am very joyful and curious about what I can understand and learn in this other (spirit) world.

I am so grateful to each person who appreciated Mr. Rosie and allowed him to teach them and touch their hearts. My home is quieter since his leaving, and I miss his crow, his presence, and his big, generous heart. His spirit surrounds us, and once in awhile, I look up toward the sky and see a big wash of energy in the vague outline of a big, big rooster. 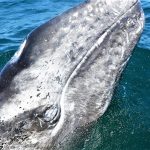 The Elders of the SeasAnimal Communication