The Song of the Quaking Aspen

This month marks the 2-year anniversary of my move to Santa Fe, New Mexico. After over a decade in northern Arizona, where I loved living in both the ponderosa pine forest and the desert riparian ecosystem of the Verde Valley, I am loving exploring the high desert and alpine ecosystems of my northern New Mexico home.

I live at about 7200 feet elevation, with the Sangre de Cristo mountain range, the southernmost subrange of the Rocky Mountains, overlooking the city. The mountains are a primary habitat for the Quaking Aspen forest–or, as I call them, The Aspen People.

The quaking aspen are best known for their brilliant yellow-gold foliage in the autumn; however, I’ve found that I adore being among them at any time of year. Their energy, consciousness, and wisdom nourishes me deeply, and I love to be with them as much as I can. This past weekend, I went up the mountains for a solo hike, walking a trail that I know best as a cross country ski trail.

What I experienced with the aspen filled me with awe, reverence, and gratitude.

First, a bit of bio 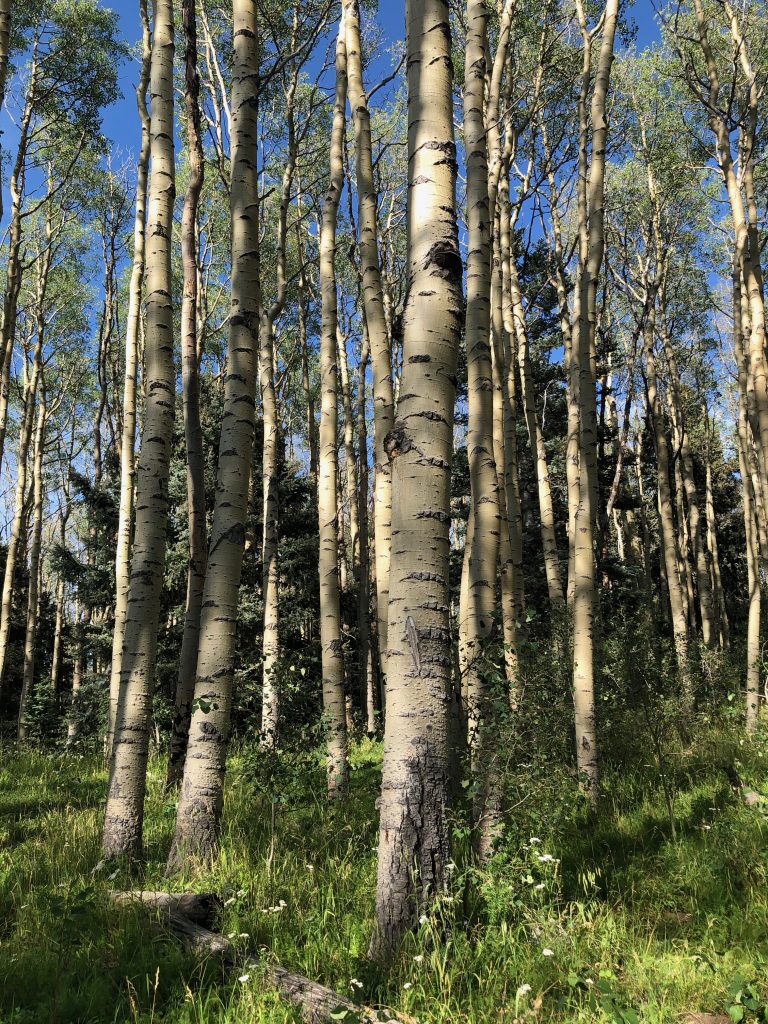 Quaking Aspen–Populus tremuloides— is the most widely distributed tree in North America; it is  found from Canada to central Mexico.

Stands/groves of quaking aspen are called “clones” because they are not several individual trees, rather, aspen is noted for its ability to regenerate vegetatively by shoots and suckers arising along its long lateral roots. Root sprouting results in many genetically identical trees, in aggregate called a “clone”. All the trees in a clone have identical characteristics and share a root structure. Aspen clones can be less than an acre and up to 100 acres in size. There can be one clone in an aspen grove or there can be many.

The largest and oldest known aspen clone is the “Pando” clone on the Fishlake National Forest in southern Utah. Also known as the “Trembling Giant”, it is a clonal colony of an individual male quaking aspen determined to be a single living organism by identical genetic markers and believed to have one massive underground root system. It is over 100 acres in size and weighs more than 14 million pounds. That is more than 40 times the weight of the largest animal on the planet, the blue whale. Pando has been aged at 80,000 years, although 5-10,000 year-old clones are more common.

As I walked among the aspen last weekend, opening all of my internal and external senses in a kind of walking meditation, I sensed a pulsing, low, humming…a vibration that I “heard” and felt with my entire body, though it wasn’t audible to my ears.

It felt like the vibration that I sometimes feel in the ocean when I am with the whales…or like the low-frequency sounds that elephants use to communicate with each other across vast distances. The pulsing vibration moved in my cells, through the boundaries of my skin, and my whole body felt as though it was expanding in every direction into the space around me in the forest.

I paused, feeling the waves of energy, consciousness, and intelligence of the Aspen People. I understood that I was being given an invitation to breathe with them, to feel their respiration, their sense their energy exchange with sun, wind, and sky (aspen photosynthesize through their bark as well as their leaves) and to glimpse their vast awareness of time, space, distance.

I realized that if I tried to allow my body to match the rhythm of their energy, slowing my breath down as much as possible, I’d be there for several hours, pulsing in and out with each wave. I also realized that I couldn’t do that…or I’d be spending the night unprepared on the mountain. 🙂

The moment that thought moved through me,  I felt the aspen respond…their rhythm sped up–shifted–just for a short time–just enough so that I could feel it in my human body. They communicated this directly to me–working with my energy field–so that I could more deeply understand and resonate with their frequency.

I stopped, opened, and allowed my energy body to continue to expand. My legs grew long, extending into the earth, until they met the aspen root, a long, horizontal root from which the shoots of the clone arise. I allowed my body to plug in, to join with the energy of this root system, to connect with its life force, its intelligence. I felt the aspens’ vast understanding of long stretches of time…and my limited human perspective in my small body, individual awareness, and short life span.

I became aware that I was in contact with…literally, standing in/above/below/among, one of the greatest, wisest, oldest consciousnesses of the planet. Whether old clones or young in our human conception of time, these exquisitely sensitive and aware beings are ancient elders who carry immense wisdom, understanding, and perspective. I was filled with an overwhelming understanding that my human perspective is so small, so limited. I can barely touch what the aspen know and hold. I bowed my head in humility, and in gratitude for the presence of these great beings.

As I had this awareness, I felt again the low hum…the vibration…so similar to what I feel with the whales.  I looked up, and in the fissure of the bark of an older stem/tree, there was the image of a breaching whale. 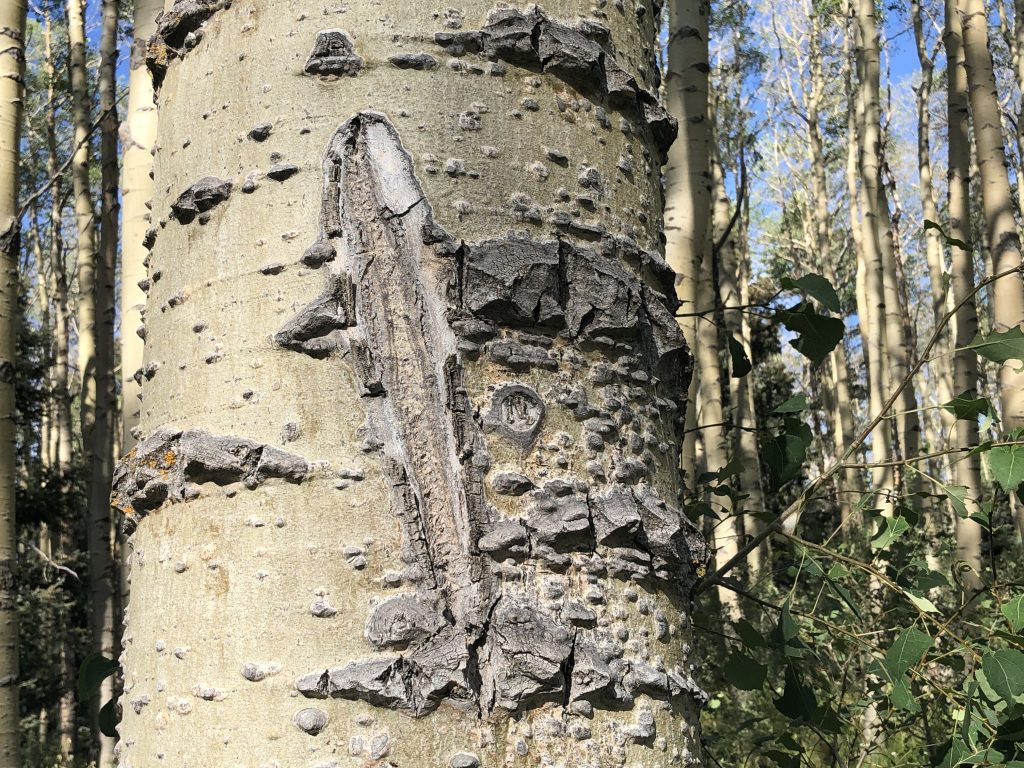 No wonder I felt them here, I realized. They know each other…land and sea…and they swim in the same rivers of cosmic wisdom. Bark…skin…breath…life…joy…wisdom…grace…

I continued along the trail,  and came into a grove of Douglas fir, also common in these mountains. As I entered their shade, I immediately sensed that this was a “Faery Grove”—a place where the nature spirits gather and flourish. I felt their energy, hearing a faint sound that I sometimes hear when in their presence…it sounds a bit like crystalline chimes or bells…and felt their joy. It made me giggle out loud. I could feel how the whole mountain was filled with the magic and grace of the devas, the nature spirits, the faeries…tending the plants, the trees, the streams.

The aspen all over the west are struggling…for many reasons…almost all of them related to climate change/global warming and human interference and forest disruption.  Read more here: What’s Killing the Aspen?

I think of this as I walk among them, feeling the expansiveness of their perspective. As I walk, I hold the questions in my heart that so many of us are holding in these times: How do I show up for the world as it is right now? How do I show up for the melting of the Arctic, the burning of the Amazon, for the children separated from their families, living in cages, traumatized by the government of my country at the border of the state I live in; for the poisoned waters, the species dying daily, beings of all species all over our beloved planet who are suffering in countless ways…

I walk with my daily prayer in my heart: “Show me how best I can serve; help me to live each moment in compassion, kindness, and joy; teach me to love purely, boundlessly, as the great teachers of all species love…”  And I wonder, in my small, limited human perspective, does it matter? Does it have an impact? Can it ever be enough?

The aspens sing me their answer, in the vibration of their trunks and leaves, in the flow of the ancient wisdom of their roots: “Sing the song that is yours to sing. All beings must sing their own song. From the singing of our songs, a new world is birthed into form.”

For me, the song that is mine to sing is this listening to the aspen, the whales, the dragonflies, the cats, the bees, and helping others of my species to hear their wisdom, too. For others, it may be loving a child, caring for an old dog, making a home beautiful, writing a poem, making a meal, nursing the sick, becoming an activist, running for public office.

Each of us has a song to sing..and the time is now…sing we must. The aspens, in singing their song, inspire my own. It doesn’t matter if the song is small or large, loud or soft, or even if we are particularly good singers. What matters is that we sing…that we send our songs, our devotion, our love into our world, as best we can, every day, with the full commitment and strength of that which is most alive in our hearts.

Interspecies Communication is not just for animals! If you’d like to learn more about communicating with trees, rocks, nature spirits, and all of life, here are a few upcoming programs:

And, finally, here are a few of my favorite books about the wisdom of trees, and communicating with the nature spirits:

The Hidden Life of Trees: What They Feel, How They Communicate; Discoveries from A Secret World by Peter Wohlleben

The Overstory: a novel by Richard Powers

Enchantment of the Faerie Realm: Communicate with Nature Spirits & Elementals by Ted Andrews 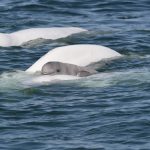 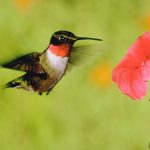 Learn to Lead In LoveInterspecies Awareness and Wisdom, Spirituality