Losing a beloved animal friend is HARD. Really, really hard. And often, in the middle of the grief, pain, and sorrow of letting go, there are transcendent, powerful gifts that animals share with their people. It’s an honor and a privilege to be a facilitator of end-of-life conversations between animals and their families…it’s some of the hardest and holiest work that I do.

This post is written by Jennifer Woyton, one of my longtime clients and animal communication and animal Reiki students. Jennifer sent me this article on the three-year anniversary of her beloved dog Gable’s death, and I felt it would touch others the way that it touched me.

I had the privilege of meeting and communicating with Gable over time, and assisting Jennifer and Gable with their end-of-life conversations and decisions. Gable’s strength, wisdom, and inspiration continue to unfold for Jennifer and for all who knew and loved him. Their relationship continues, even though his body is gone. Here is their story.

by Jennifer Woyton, with Gable, the Big Black Dog

Almost exactly 10 years ago, I was looking to fill a hole in my heart. My soul mate dog, Marlow, had passed unexpectedly, and I’d been searching for a big-black-dog-replacement to protect me, walk with me, and be my new best friend. I had been unsuccessful, until one day when working at the animal shelter and sharing space with another rescue group, I spotted him. He was glorious, with silken black hair on a huge frame, a beautiful head and plumed tail…his intelligent eyes looked at me, and right there I was taken.

Unfortunately, before I could say, “That’s my dog!” another family was taking him home and I resigned myself to another loss. Fast forward several months…while working at the shelter again that day, I saw HIM getting out of a car with his family. I knew him right away. “That’s my dog!” I thought, but assumed they were coming in to find him a friend but to my delight, when I went up to the family, I found they were returning him! Yahoo! They said something to the effect of, “You can take this Devil Dog and shove him…blah, blah, blah….”

I think I actually skipped away with him, delighted that he was back in his rightful home, with me, where he belonged. I called the other shelter and told them what was happening and they were perfectly happy for me to take him into my home, no problem! Right? No, not right! He was CRAZY! But I knew from the second I saw him that he was MINE and we would figure it out. I named him Gable after my favorite movie, Gone with the Wind, and Clark Gable. His beautiful black coat and white ascot reminded me of the tux Rhett wore in the movie.

I told my friends, “Six months of training and he’ll be FINE! Really!” Boy, was I wrong. Six years…yep, count ‘em….S-I-X. Slowly, we worked together to build trust, to learn to dance with each other, to figure out what he needed and what I needed and how to make that gel into living together. I found his energy to be absolutely boundless. I figured out ways to exercise him and work his mind to tire him out. I noticed that he never actually slept – it was more of a cat nap but always ready and up in a flash if he thought something was happening.

Gable was always ready to GO! And GO he did – sometimes with me hanging on to the leash and too stupid or determined to let go. Gable liked to chase cars and the bigger the car or truck, the more fun it was! Woohoo! Mack Truck! Yep, I got dragged in front of a few of those. Those stupid lifted trucks that guys drive? I learned to hate and fear them – I knew my shoulder wouldn’t be the same for days. Gable caused me several ugly spills chasing cars and one time made me sprain my ankle so badly when he was jumping after a truck that I had to crawl almost a half mile home on my hands and knees. I called him some choice names that day…oh yes.

Gable was my teacher; he was my mirror. Gable taught me more about myself and my emotions than anything in my life has or probably ever will again. Gable was a reflection of what I did, didn’t do, should do, and better not do…to sum it up, he showed me a new way of being, a better way of walking through life, in the moment, paying attention to it.

I learned to pay attention to myself, something I’d never done before. He taught me the art of living right now and enjoying it. It took him many years to show me, and I think I actually may have figured it out in the end.

Gable had a pretty exciting life, and I think I was able to show him a thing or two as well. In our pursuit to find things for him to do to exercise his mind and body, we did a lot of fun stuff. Gable participated in sheep herding, dock diving, lure coursing, doggie dancing, agility, obedience, bike riding, hiking, swimming, and we walked thousands and thousands of miles together. He went to the snow, the lake, the river, the mountains…you name it, we were there together. We had so much fun! There has never been anything that I asked him to try that he refused. He was always up for an adventure. Lure coursing was his favorite. The opportunity to chase something and NOT get in trouble? Okay! He loved it! He would hear the “zing! zing!” of the lure course machine from the other side of the field, far, far away and start barking and carrying on. The entire time we waited for our turn on the lure course he would BARK nonstop and every third bark or so, lunge full speed ahead at the lure course and the dog running it and almost pop my shoulder out of socket. Gable was one strong boy! It was beautiful to watch him on the lure course… 95 pounds of muscle tearing across the field after the fake rabbit. He was awesome to watch and even the people running the lure machine would comment on how fast he was for such a big guy. Ninety-five pounds and 95 mph…that’s my boy – that’s my dog!

Gable was diagnosed with mouth cancer in January 2012. There was no cure and no really good possibilities for treatment. Two to six months…that was our time frame. Oh, shit. This dog, who has never known the meaning of stop, quit, slow down…suddenly I realized how HUGE his heart really was. Lying on the bed with him one evening, I couldn’t imagine a heart that big actually stopping one day. Could it be possible? Listening to his heart, his breathing, burying my face in his soft coat and trying to remember forever the simple doggie smell of him, I realized that he had one lesson left to teach.

He reminded me of NOW.

This is it; this is all you have.

So, over the next months, I was blessed to re-discover my dog. I didn’t really ever take him for granted, but I’d forgotten how to pay attention to all the special nuances of what made Gable, well, Gable. We took the long way around coming home so he could stick his head out the window and sniff, and I appreciated how vigorously he barked at bicycles and motorcycles again!

Instead of being aggravated by him carrying on over the golf carts in our neighborhood, I relished him barking and warning them to stay far, far away from his mommy! I noticed again the little noises he made when we played kissie games, I laughed at his appetite for butter, his favorite food in the whole world, and just plain enjoyed our time together. There’s no way I could sum up this amazing dog in a few paragraphs, but for those who knew him and knew him well, I would dare say they would agree that not too many dogs like him are walking this earth.

Gable was an amazing, valiant, persistent, energetic dog, but above all else he had heart. Heart like you hear about racehorses having…the heart to never give up, never give in, and never take no for an answer. And his capacity for love, well, we’ll just say that it was enormous. He loved me so much with that big heart of his. Sometimes I would hide in the bathroom just to get away from all that love – it was just too much and I needed a break! I am actually laughing remembering that! Too much love!

My 13-year-old Newfoundland mix never should have made it to his age; he never should have been in the excellent condition he was in. With such an aggressive form of cancer he should have been writhing in pain and had no interest in making his mom RUN around the neighborhood one evening because he wanted to blow out the cobwebs. But Gable did. His heart pushed him to gobble up every second in this life down to the last morsel and then some. He would have gone on until he didn’t have breath in his body, but in usual mommy-fashion, I chose to rein him in so in actuality, he could fly. Before the excruciating pain set in, before he couldn’t eat anymore, before he was so riddled in cancer and pain that the mere act of breathing would be painful. Nope, none of that for my boy. He was just too big of a dog to waste away into nothingness.

There was nothing, nothing at all, small about Gable. From his size, bark, heavy breathing, vigor, and desire to live and love BIG – as big as possible. I sure hope they can handle him up in heaven! I’ll bet when I get up there one day, the angels will say:

“Thank God she’s here! Now SHE can watch over him and keep him out of trouble! He’s been chasing around here like a maniac for the last 50 or so years and we’re exhausted! That’s her dog!” 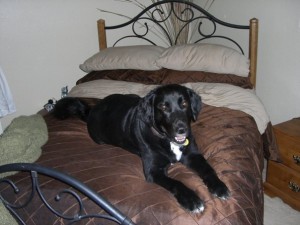