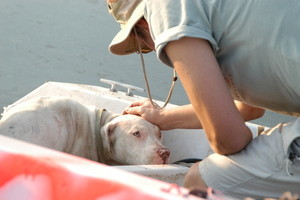 In reading and watching the coverage of the 10th anniversary of Hurricane Katrina this weekend, I’ve been thinking a lot about my experience as a volunteer at the Humane Society of the United States emergency animal shelter in Gonazles, LA, in September, 2005.

I remember watching the devastation and the incredible human suffering on TV in the days after Katrina hit New Orleans. Eventually, the media coverage also started to include the massive animal suffering that was also created not just by the storm, but by the lack of disaster infrastructure and evacuation protocols that forced people to make an impossible choice between saving their own lives and staying with their animals…which likely would result in the deaths of everyone.

I had to do something. I had animal rescue experience, and I knew I could help. HSUS transported me to Louisiana because I could administer medications and subcutaneous fluids, and had experience working with aggressive and fearful animals.

The experience was heart-wrenching. I witnessed the best and worst of humanity. Volunteers came from all over the country to help, living in tents in the blistering heat. Many people, including me, suffered from heat exhaustion and dehydration and had to be treated with IV fluids in the emergency medical tent. I discovered that the article written by my local newspaper while I was in Louisiana is still archived online, and in reading it, I was flooded with memories from my experience.

Our facility had National Guard protection 24/7, to protect the animals and volunteers from dog-fighting gangs who were attempting to break in to steal the pit bulls. Anyone who was there, or at any of the other rescue facilities, will remember the heartbreaking stories of loss, and also the beautiful (but all-too-infrequent) reunions when people would find their missing animal family members.

One of the most touching memories I have from my experience there was the flight home…the plane was filled with rescue volunteers who were taking animals with them as they left, either to adopt into their own families or to rescue facilities in areas better equipped to handle them. All airline “rules” about animal passengers were suspended as the flight crew made sure that each animal had what they needed for a safe and comfortable journey to their new lives.

Much was learned about disaster animal rescue after Katrina. One of the best-organized and most effective organizations on the ground and in the aftermath was Best Friends Animal Society. Best Friends has become an international leader in progressive sheltering, rescue, and rehabilitation (and they are just a few hours north of where I live, in Kanab, Utah.)

Humane organizations are now much better prepared and organized to help animals after natural disasters. There were a lot of mistakes made and many lessons learned from the Hurricane Katrina experience, and post-disaster care for animals is better today in the USA because of it.

One of the most important changes after Hurricane Katrina was the passage of the Pets Evacuation and Transportation Standards (PETS) Act in 2006. The law now requires that local counties, in order to qualify for federal relief funds, must have a pet evacuation plan in place in the event of a disaster. The PETS Act has changed the way local and federal disaster response teams relate to companion animals and their people in every natural disaster in the United States since Hurricane Katrina.

My experience as a volunteer in animal rescue after Hurricane Katrina was incredible training  for my work as an animal communicator. I learned volumes about working with traumatized animals, how they communicate, and how trauma and stress alters how animals communicate, just as it does with humans. Some animals shut down. Some animals revert to wild or feral behaviors. Survival instincts kick in when all that is known disappears.

My mission to work as an animal communicator and to teach animal communication to as many people as possible was born from this experience and others like it in animal rescue. I can never save every life I’d like to save, or help every traumatized or homeless animal I want to help.

I realized that by using my skills in animal communication and energy healing to help those animals who cross my personal path, and also by teaching people the universal language of telepathic communication, I can help exponentially greater numbers of animals and people all over the world.

My experience in Hurricane Katrina animal rescue changed my life. The animals that I worked with in the post-Katrina shelter are some of my greatest teachers and inspiration for the work that I do today.

As we remember the Hurricane Katrina tragedy and celebrate the positive changes made in the last 10 years, we honor those of all species who lost their lives, as well as those whose who have taught and blessed so many through their surviving and thriving after this experience.

Are you ready to learn the universal language of telepathic communication with animals? Check out the Beginning Animal Communication Online Class. 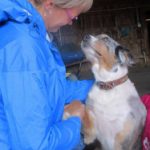 The End-of-Life Journey with Our Animal CompanionsAnimal Communication, Pet Loss and Grief