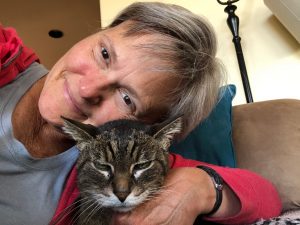 This week, I’m sharing a personal story from my animal family that was a bit too tender and raw to share until now.

Those of you who have taken my classes or followed me for awhile know my beloved cat Louie, who is now 17 years young.

Louie is one of the wisest, most energetically and spiritually advanced beings I have ever known. As I often say to people, I’ve lived with Louie for over 16 years, and I can still barely understand what he knows, what he’s up to, the work he does with the Earth and in many dimensions of time and space. My job, as I see it, is to listen to Louie, learn from him as much as I can, keep him safe, and stay out of his way.

Louie came to me as a foster cat when he was a little over a year old, back in 2004; he’d been found by the side of the road, hit by a car, with a fractured pelvis and shattered left rear leg. I fostered him through his recovery and surgery to remove the damaged leg, and of course, after going through that with him (he was a super-trooper), I knew he wasn’t going anywhere. I was a foster failure, Louie completely stole my heart, and I adopted him. He became known as Louie the 3-Legged Wonder Cat.

In early April of this year, in the middle of the coronavirus shutdown, Louie suddenly became very ill. The vet felt a large mass in his belly; the prognosis wasn’t good. Emergency surgery or immediate euthanasia were our only options. I was able to communicate with Louie even though we were both shocked and stressed; he was willing to try surgery, and he let me know that he was aware that he might die, but that he wanted to stay on earth and with our family for awhile longer if it was possible. We decided to do surgery, risky as it was, knowing that it was possible that once under anesthesia, Louie wouldn’t wake up.

I had about an hour with Louie at home before I had to take him back to the vet for his surgery. We sat together on the earth, in his favorite little garden. He felt terrible. I cried, I prayed. I tried to say all I wanted to say to him, which was impossible. We shared our deep love for each other. My heart couldn’t bear the thought of losing him so quickly.

I took him back to the vet, tears streaming down my face; and I came back home to wait. I sat outside in the early spring sun. I prayed. I sent Reiki for Louie, for the vet, for the surgery. I cried and cried and cried. I asked my whale teachers and friends for help: the blue whales, the humpback whales, the grey whales. I cried some more.

A huge turkey vulture flew overhead. I rarely see them near my land, and I consider them to be some of my great teachers and guides. When I am in their presence, I feel a great energy of transformation and renewal. Turkey vultures can also be the guardians of death and the passage to the spirit world.

Nervously, I checked the weather on my phone. Instead of Santa Fe, New Mexico, my phone gave me the weather for…

I am not making this up.

There is no searchable weather location for the North Pacific Ocean on the iPhone weather app. Believe me, I checked. A few times. Okay, about a couple dozen times. It stayed that way for a few minutes, and then disappeared.

Then, I knew…the whales were with me. And with Louie.

I checked my watch. The surgery had started. And then, with great clarity, I felt Louie’s energy, and heard his telepathic “voice.”

About 5 minutes later, the vet called. The mass was softball-sized, in his liver. And she said the words I’d been waiting to hear,

“I think I can get it. We won’t know for sure until we get the biopsy results back, but there is a good chance it is benign.”

And so, several hours later, after a massive and difficult surgery, Louie woke up. 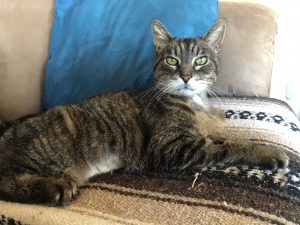 He spent the next several days in the hospital recovering. Because of the shutdown, I couldn’t visit him. On day 2, when the vet called to update me, she said, “Is he always like this, or is it the drugs??” Louie was purring, wanting to engage, to be held, make friends, make relationships, share his bright light.

I said, “Yep, that’s Louie.” (This is the cat who would jump into the UPS truck in our old neighborhood so he could greet the driver, who he called “one of my many friends.” )

A few days later, I brought Louie home. The biopsy showed that indeed, the mass had been benign.

Louie has returned to his life, his deep meditations with the Earth, and continues his outreach to his wide circle of “friends” in many dimensions. He is still  irritated by and sometimes fights with Milo. He’s cuddlier than he’s ever been.

We’ve been given a great gift, and each day, I think about how grateful I am for this miracle, for his presence, for the gift of Louie’s strength and awareness and sweetness in this time.

What an honor, what a blessing, to have been able to share so many years with Louie the Wonder Cat. And with grace and the blessing of the vultures and the whales, I hope we’ll have many, many more. 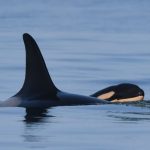 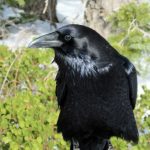