Whales in the Desert 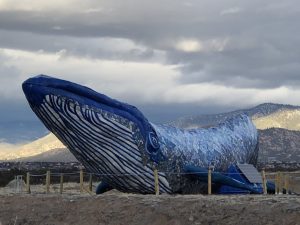 This post is about the “miracles” that show up when we least expect them…and offer a whole new way of viewing the world and the “reality” that we share.

In the spring of 2019, I’d just returned from spending two weeks in Baja California, Mexico, where I’d led a women’s interspecies communication and meditation retreat. We’d spent time in deep practice and connection with the blue and gray whales and many other beings in the Sea of Cortez and San Ignacio Lagoon, on the Pacific coast. I’d been home in New Mexico for a few days, and was happy to return to my regular schedule and routines, including my swimming workouts at the local community college pool.

As I drove to the pool, still in some way immersed in the energy of the whales, and, truth be told, missing them deeply, I turned the corner, and this is what I saw: 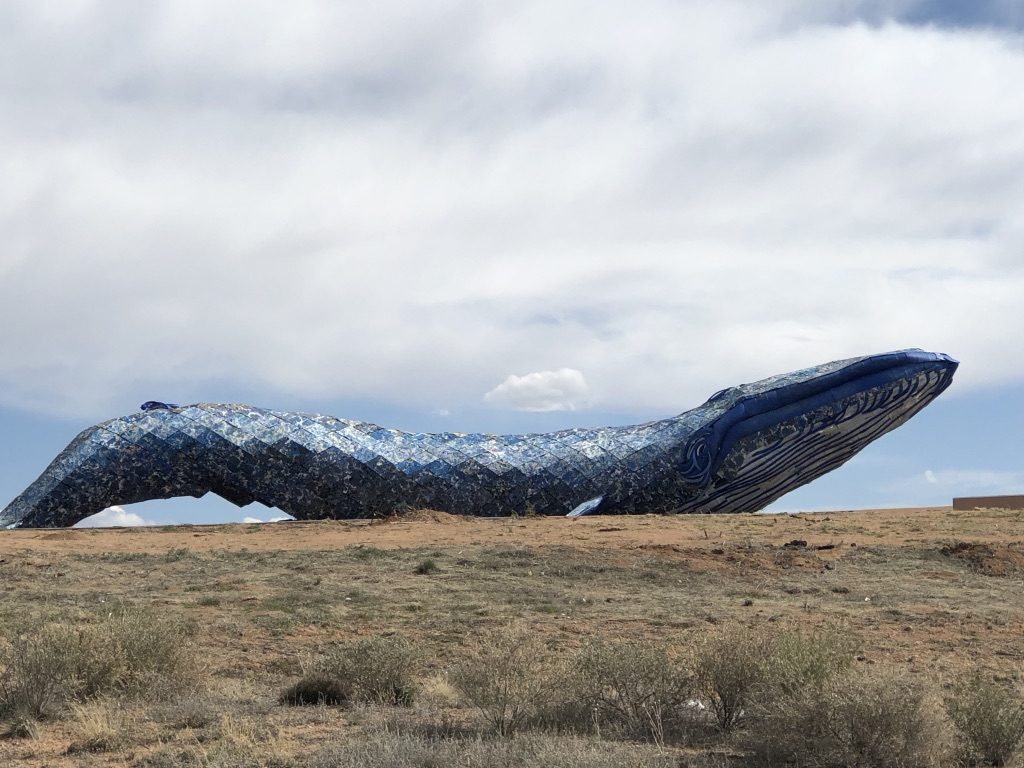 It took a moment or two to register in my consciousness…moments when I continued driving as I would any other day.

And then, it hit me, and I slammed on the brakes and threw the car into reverse.

There was a moment, a rather long, extended breath of time, where my brain and my body couldn’t really process the information my eyes were taking in, and I thought,

“Okay, now I have really gone off of the deep end. I am starting to see whales in the desert. This whole multidimensional consciousness thing has gone a bit too far.”

I parked the car, and began walking toward the giant apparition, when I could see a truck, tools, a ladder, and two people eating their lunch, nestled under the great whale’s belly.

I am not making this up. 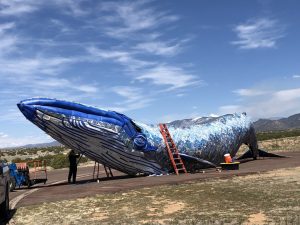 And so, I took a deep breath, walked up to them, and started a conversation. I probably thought that if it really was a lapse in my sanity, they wouldn’t talk back to me. But they did.

I discovered that they were artists, and that they were the creators of this sculpture which had been purchased from the Monterey Bay Aquarium by one of our local arts organizations, Meow Wolf, to be installed in permanent residency at the community college. They had just moved the giant whale from California to New Mexico, and were in the painstaking process of reassembling her. Here, at the community college. The one around the corner from my house. In New Mexico. In the desert.

I learned that her name is Ethyl. Short for Polyethylene. She is life-sized, 82 feet long, and is made entirely from recycled plastic. Her creators hope to raise awareness and inspire action around the plastic pollution crisis in our oceans and on our planet.

Then, the conversation moved from really interesting into the territory of magic.

I shared with them that I’d just returned from Baja, and being in deep connection with the whales. They told me that the sculpture had been modeled on the body of an actual blue whale, who had washed up dead on the beach near the Monterey Bay Aquarium shortly after they had been commissioned to create the sculpture. She was a whale well known to the researchers at NOAA. They knew her story, including her family lineage, her calves, and her history of entanglements and ship strikes. She had been killed by a ship strike. And so, the artists and the scientists worked together to painstakingly create the sculpture using the dimensions, scale, and form of the body of the whale who had died.

And her energy guided them.

They shared with me that they were completely aware of her spirit in the sculpture and said that she had guided their whole creative process, and continues to guide her own journey–they were clear that they have been in service to her.

They told me about the labor of love and community that was involved in creating this sculpture. Each piece of recycled plastic was lovingly cleaned and tended to, in a sacred, prayerful way, by twenty people. They listened to my whale stories with respect and understanding, and all three of us were close to tears as we sat under her body and talked about her spirit and what she has to teach.

She was dedicated here in her New Mexico home on Earth Day, Monday, 4/22/19. She is illuminated at night with solar lights, radiating her beauty into the darkness.

In the past year, I’ve spent time with Ethyl. I sometimes go and just sit with her, in quiet contemplation, communication, and meditation. I often see others doing the same. I sit on the ground near her, and I feel the sculpture inhabited and alive with the spirit of the blue whale who inspired her.

There are so many layers in this story, layers of connection, of despair, of transformation, of beauty.

Plastic pollution is killing whales and marine life of many species all over our planet. And plastic is made from oil, one of the Earth body’s fluids/bloods. Humans began to use oil from the Earth’s body when using the oil from whales’ bodies was no longer viable. It’s a complicated, difficult story. Whales were killed for oil. Now whales are being killed by plastic made from the Earth’s oil.

And here, almost in my backyard, is a sculpture made from plastic that holds the energy of an individual blue whale, one of the greatest consciousnesses on the planet. I can go and sit with her and be in her presence and receive her teachings and her wisdom. It’s stunning.

It has comforted me in the depths of my heart to have this presence so near my desert home. Each time I pass her, I feel a connection with the blue whales all over the planet; with this particular individual whale spirit, and with the oceans. From the sacred lands of northern New Mexico, to the oceans all over the world, I feel the blue whales’ vast awareness, consciousness, and wisdom.

Over this last year, inspired by the whales, and guided by a group of fairy folk who requested that I make them a sanctuary in my yard (that is a story for another post!), I’ve been in a deep contemplation and practice with plastic. I have been considering the possibility that offering plastic my respect and love, honoring and recognizing both its origins in the body of the Earth and the absolute necessity of our species radically altering our use of and relationship with it, may have reverberations in what I can only describe as the quantum field.

I’ve been meditating with plastic as I meditate with Ethyl, and I have noticed that my own relationship with plastic has changed. Rather than viewing it as something “bad,” a problem to be gotten rid of, or trash to be disposed of, without consciousness or life-force, I recognize that plastic, too, has an energetic frequency, an essence, a vibration that I can be in relationship with, in some kind of way.

I don’t know how this story ends, or if it does. I hold in my heart the complexities of the issues that the whales and our entire planet are facing, at the same time that I hold the miracle of vision, depth, and transformation that is available and possible, for all of us, modeled and guided by the great teachers of our planet, and here, in New Mexico, by the spirit of a blue whale in a recycled plastic body.

Whales in the Desert. It happens. 🙂 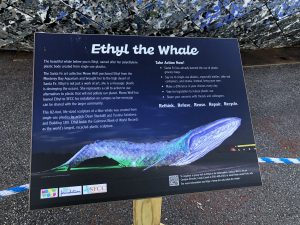 For more information, here are some news articles about Ethyl: 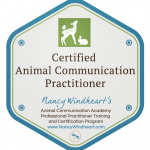 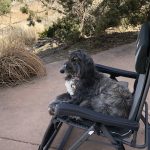