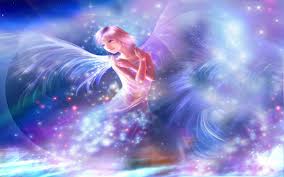 Fairies…elementals…sprites…elves….gnomes…nature spirits…stories of these beings are found in almost all human cultures.

Though known by different names, and comprising many different “groups” or expressions of energy and consciousness, these beings have been understood to be an integral part of consciousness and life on Earth by human cultures and peoples for eons.

In our modern cultures, our loss of connection, relationship, respect, and awareness of these beings is epidemic, and nearly complete. We don’t learn about them, except in “fairy tales” which we are expected to “outgrow” by a certain age; we don’t talk about them, except if we are a little “on the edge” of mainstream human society, and our stories, awareness, and relationships with these beings have become relegated to the realm of fantasy, i.e., that which is not “real.”

One of the wonderful things about learning to communicate with all life, often beginning with animals, is that our awareness, understanding, and experience of beings in many realms begins to open to us. We may reclaim the ancient knowledge of the presence of beings who, though now largely unseen, remain in our world, on the land, in the forests, canyons, deserts, rivers, and oceans. 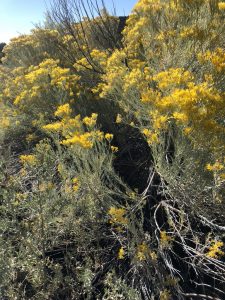 In northern New Mexico where I live, the gullies that run through the desert and carry extra water after the rains are known by their Spanish name, arroyo. An arroyo runs through “my” land (I recognize that I am the guardian/caretaker/steward of this land, not the “owner”). It is one of the main arroyos in our area , stretching for miles in both directions from my home.

Though held now on “private” property, arroyos in New Mexico are generally regarded as communal, and used by people in the neighborhood for walking, often with dogs, and riding their horses. The ancient Puebloan people who lived on these lands often built their homes and communities near arroyos, important seasonal sources of water in this arid climate.

One day a couple of years ago, I was out in my yard, puttering about, and got the familiar feeling that I sense in my body when I’m about to receive an important communication. I stopped, became still, and listened.

“We are a community of fairy people living in the arroyo. We wish to have a sanctuary on your land, an area where we will be safe, and where we can create, sing, dance, and play. We’ve been watching you, and feel the energy of your land. Will you co-create this with us?”

I was overjoyed…delighted…and a little overwhelmed. What did I know about creating such a space for these beautiful, mostly unseen and unknown beings who had trusted me enough to communicate with me and make this request?

“We’ll help you. It doesn’t need to be obvious or fancy. The energy, more than anything, is what matters. We know you see us, hear us, and respect us.”

Then, they showed me exactly where they wanted to be. 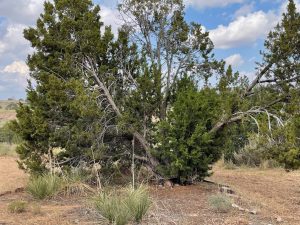 “That juniper tree. it’s perfect. Make a place for us there.”

The juniper tree they were referring to was just inside the gate closest to the arroyo. When I moved onto the property a few years before, the juniper had several dead limbs and seemed to be struggling. I’d removed the limbs and had been watching it carefully. There were several large stones that had been placed nearby by a previous resident, as well as the stump of another tree that had been removed. 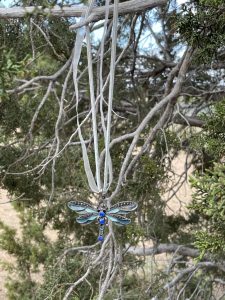 I communicated to the fairies how much I felt honored and overjoyed by their request. I cleaned up the area, rearranged the stones, and began to hang solar “fairy lights” and decorations from the juniper’s branches. 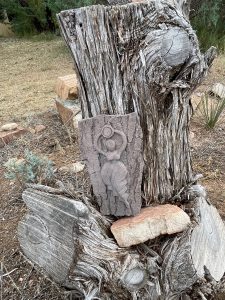 Next, a few items from my home made their way outside, tucked carefully and hidden under the low branches of the tree. A small glass whale ornament. Some extra pine cones. Some special stones and crystals, a little wind chime. A couple of flat stones became a floor, and larger stones and branches became a kind of roof. There was a small entryway and a stone circle surrounding the area. I tended the native plants and placed a carving of a tree goddess in the center the stone circle.

The fairies came. I could feel their presence, their joy, and our connection. 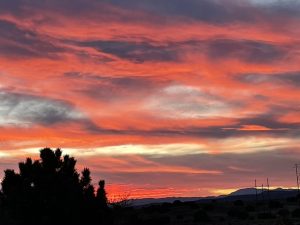 My dogs started spending even more time around and under this particular juniper tree. In the evenings, we’d sit outside, watch the sunset and see the fairy lights come on as darkness fell. A few times, I could hear faint sounds of singing, tinkly bells, and laughter.

I’ve never “seen” the fairy people with my physical eyes. Once in awhile I catch a glimpse of moving lights, sparkles, or hear their sounds. I mostly recognize their presence by the shift in energy that I feel, the gentle tickle of laughter, delight, and joy that I feel when I’m in their presence. 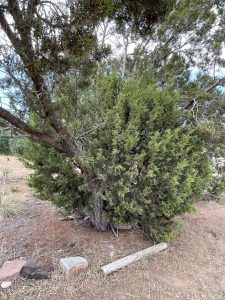 After a short time, I noticed one obvious, unmistakable change. In the months immediately following the creation of the “fairy sanctuary”, the juniper tree started growing.

After the previous years of looking somewhat sickly, in a short time I noticed new growth. Lots of it. Green started filling in the bare areas where the dead branches had been. New branches emerged. There was a vibrancy and new life in this tree that was wonderful to see and feel.

The fairies often tend plants, flowers, and trees, and I could feel the shift in the juniper tree as new energy and life surrounded her. My attention and love, and the invitation and presence of the fairies, gave her new energy, new life.

My understanding from this group of fairies is that they come and go from this place on my land, traveling back and forth from the “wilder” areas in the arroyo. I am so grateful for their presence, and the energy and joy they bring to our home. And I can feel their gratitude for the honoring, respect, and awareness they experience here on our land.

My animal family communicates about the fairies and elemental beings as  “no big deal, of course we see and feel them and know they are here.” They experience them much as they experience the wild animals, the birds, the other beings who share this land, as obvious, palapble lives, presences, and energies that are part of the community of life here.

Communication with the nature spirits is not just a fantasy, an “make-believe”, or a dream. If we allow ourselves to become quiet, open, and receptive, we can cultivate relationships and connections with these beings who, though often invisible to us, bless our world with magic.

If you’re interested in exploring more, I recommend the excellent book on the fairie realm by Ted Andrews: Enchantment of the Faerie Realm: Communicate with Nature Spirits and Elementals.

In the Deepening Animal Communication Online Class, we will also spend time exploring communication with the nature spirits, as well as trees, plants, mountains, rivers…all of the expressions of consciousness and life in our world.

I hope that this post will inspire you to explore more connection and communication with the nature spirits in your world! 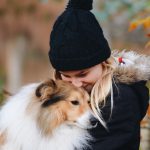